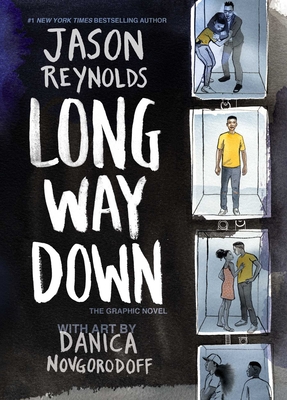 “A novel in verse that spans the length of time it takes for an elevator to descend, Long Way Down finds Will mourning the death of his brother and grappling with the burden of avenging his murder. Will’s grief permeates every page, from his recollections of everyday childhood memories to his encounters with other figures from his past whose lives were destroyed by gun violence. Jason Reynolds says more with a stanza than most authors can say with a chapter.”
— Lelia Nebeker, One More Page Books, Arlington, VA

Will’s older brother, Shawn, has been shot.
Dead.
Will feels a sadness so great, he can’t explain it. But in his neighborhood, there are THE RULES:

But bullets miss. You can get the wrong guy. And there’s always someone else who knows to follow the rules…

Jason Reynolds is a #1 New York Times bestselling author, a Newbery Award Honoree, a Printz Award Honoree, a two-time National Book Award finalist, a Kirkus Award winner, a Carnegie Medal winner, a two-time Walter Dean Myers Award winner, an NAACP Image Award Winner, a two-time Odyssey Award Honoree, and the recipient of multiple Coretta Scott King honors. He’s also the 2020–2022 National Ambassador for Young People’s Literature. His many books include All American Boys (cowritten with Brendan Kiely); When I Was the Greatest; The Boy in the Black Suit; Stamped; As Brave as You; For Every One; the Track series (Ghost, Patina, Sunny, and Lu); Look Both Ways; Stuntboy, in the Meantime; Ain’t Burned All the Bright, and My Name Is Jason. Mine Too. (both cowritten with Jason Griffin); and Long Way Down, which received a Newbery Honor, a Printz Honor, and a Coretta Scott King Honor. He lives in Washington, DC. You can find his ramblings at JasonWritesBooks.com.

Danica Novgorodoff is an artist, writer, graphic designer, and horse wrangler who lives in Kentucky. Her books include A Late Freeze; Slow Storm; Refresh, Refresh (included in The Best American Comics 2011); and The Undertaking of Lily Chen. Her art and writing have been published in Artforum, Esquire, Virginia Quarterly Review, Slate, Orion, Seneca Review, Ecotone Literary Magazine, and many others. She was awarded a 2015 New York Foundation for the Arts fellowship in literature and was named Sarabande Books’ 2016 writer-in-residence. She has been a fellow at the MacDowell Colony, Blue Mountain Center, VCCA, Brush Creek Foundation for the Arts, and Willapa Bay AiR. Visit her online at DanicaNovgorodoff.com.

*"A moving rendition that stands on its own."
— Kirkus, starred review

*"Novgorodoff’s watercolors, which bleed at the edges like pavement stains, match the text in mood and fluency, and by putting faces to characters, they tacitly untangle the web of revenge killings and mistaken identities foundational to the plot."
— BCCB, starred review

*"Reynolds’s words paint pictures of their own in this tragic yet poignant illustrated tale that offers no answers to the seemingly ­impossible choices some communities face."
— School Library Journal, starred review

*"Far more than just an illustration of the events of the novel, Novgorodoff’s iteration powerfully cultivates the tone and mood of its source material, demonstrating just how effective and artful comics can be."
— Booklist, starred review

"Danica Novgorodoff has done a superb job of graphically capturing the gritty emotions of the original story—the anguish, the cyclical bloodshed, and the terror of the present situation."

"Reynolds has skillfully edited and rearranged his original verse novel to create room for Novgorodoff’s impressionistic ink and watercolor illustrations to flourish, resulting in an adaptation that feels authentic to its new comics format."
— Horn Book Magazine *STARRED*

"In his YA novel Long Way Down, Jason Reynolds uses the painful past to reveal the difficulty between doing what you are taught is right and doing what is moral.

Danica Novgorodoff's ink-and-watercolor illustrations are a beautiful addition to Reynolds's lyrical text. A gorgeously illustrated reinterpretation of the novel."
— Shelf Awareness for Readers